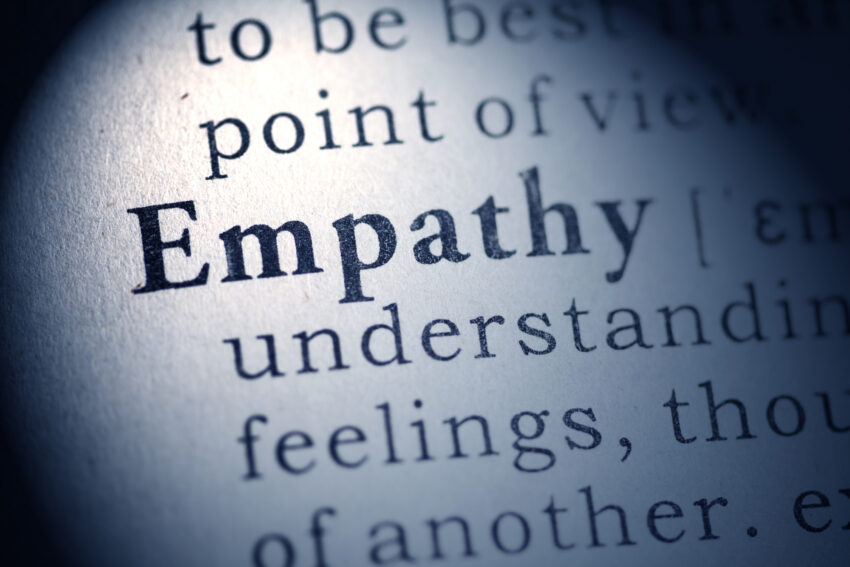 “ To be empathetic is to see the world through the other person’s eyes and not see our world reflected in their eyes.”

Empathy has the power to transform human relationships. It can also potentially increase the effectiveness of therapeutic approaches in the health care scenario. Its importance is so significant that the Oxford University Medical Sciences core in England has an interdisciplinary program (OxEmCare) dedicated exclusively to the study of empathy, which includes physicians, philosophers, psychologists, and sociologists who study empathy.

The article produced by Howick and Rees – two members of OxEmCare – called “Breaking down barriers to empathy in health care: empathy in the age of the internet”, has a story that objectively exemplifies this concept. An orthopedic surgeon takes his mother to the hospital where he works after she has had an episode of arrhythmia. Within twenty minutes, she had undergone an EKG, chest X-ray already had the results of laboratory tests, and her heart rhythm had returned to normal. She went home after staying in the hospital for two days. The doctor was happy with the service, which, in his opinion, had been successful. Her mother, however, reported that these were the worst days of her life. She was afraid of dying; of not seeing her grandchildren again, and these feelings were not given the attention they deserved. The healthcare team did not understand the uneasiness and discomfort she was experiencing; not even her son was able to see the situation through her eyes.

Empathy-Based Medicine re-establishes the importance of the affectionate relationship in health care. Clinical trials have shown that with this care one can reduce pain, depression, anxiety, practitioner burnout, and even, the risk of medical lawsuits. It would also improve patient satisfaction, well-being, and medication compliance. It can modify objective clinical outcomes such as the diabetic patient’s glycated hemoglobin.  In this context, likely, there could even be repercussions on health care costs.

According to the authors, Modern Medicine has brought interventions that have improved and prolonged our lives and Evidence-Based Medicine has tried to ensure that the best choices can be made. So, that new interventions should bring more benefits than harm. However, often (unintentionally), the focus ends up being on tests, drug treatments, and goals; while the particularities of the clinical encounter end up being less valued.

Slow Medicine is a philosophy that rescues the quality of time as an essential element of the medical approach and agrees with the study carried out by Howick and Rees. It advocates the sparing use of technology; the strengthening of the relationship with the patient; attentive listening; and, among others, the individualization of conduct. It can happen only when we have an empathic relationship with the patient.

Empathy consists of resonating with the feelings of the other. This is something that can be built. A clinical trial, cited by Howick and Rees, has shown that empathy can be operationalized to design interventions that benefit patients. For example, by using some behaviors, such as taking enough time to understand the patient and their story; talking about general topics; offering encouragement; giving verbal signals that the patient has been understood (e.g., verbal confirmations such as I get it, hmm, ahh, etc.), being physically engaging (using hand gestures, eye contact, appropriate touch, and leaning forward), among others.

Therefore, both in the doctor’s office and in hospital wards, one must know how to put oneself in the other’s shoes. Affective empathy occurs naturally when we are attentive to the feelings of another person, and to the emotions that are manifested by their facial expressions, their gaze, the tone of their voice, and their behavior.  This experience can lead to an altruistic motivation, or it can facilitate the decision of the best therapy to be instituted, and many times, the drug not to be prescribed – since we know that doing more does not always mean doing better. This maxim is part of the Slow Medicine Manifesto, which has as its motto: a Sober, Respectful and Fair medicine.

It is important to remember that one of the principles of Slow Medicine consists in the tireless search for the humanization of health care, and this includes also being sensitive to professionals. Thus, when we are confronted with the suffering of patients,  we can identify with them and look back to ourselves. It can contribute to our personal growth. However, it can also contribute to emotional exhaustion (also known as burnout), which can be understood as “empathy fatigue” in people who are exposed to the problems of others on a daily basis. To avoid this, there are techniques such as divergent resonance, which is intended to master feelings and demonstrate caring.

In this way, with proper training one can be more sensitive, and thus more concerned about the suffering of others, without experiencing an increase in distress, but rather a feeling of benevolence, of (even) compassion. The essence of the process is an altruistic motivation to generate good and a willingness to take action, without confusing the emotions felt by others with our own.  Compassion, like love, does not cause fatigue or weariness; on the contrary, it makes it easier to overcome them should they occur. In the words of writer Matthieu Ricard: “when selfless love passes through the prism of empathy, it becomes compassion”.

Our relentless pursuit of inner balance is as important as our advances in complex diagnostics and cutting-edge treatments. Our personal balance naturally facilitates interpersonal relationships and favors more assertive choices also at work. This movement increases our receptiveness to the demands of others and our propensity to act for their good. These values are inherent to the human being and weave a path for evolution.

If we are unable to see through the eyes of our own mother, if we do not feel her fear in the face of illness, we will be even less able to see through the eyes of someone with whom we have no connections – be they familial, ethnic, religious, or political. According to Kafka, “War is a monstrous lack of imagination”. In other words, in the art of understanding the other, one projects the experience into the imagination, amplifying the possible outcomes and sensations. However, when imagination is scarce: intolerance reigns and the consequences are endless.

When we rescue the empathy (which is proper to us) in the professional health relationship; we reestablish a valuable foundation, which is the awareness of the other’s situation. We begin to truly feel the unique caregiver-patient relationship and stop – even if only for a moment – from being the protagonists. With that, we establish a deep connection, because we begin to see, with the heart, and the soul of the one who has patiently come to us.

This article is translated from the Italian by using Deep L and Grammarly apllications. Karlijn van Eersel Kindly reviewed this translation. We are very grateful for her contribution.